As the death count rises from opioid overdoses in Hamilton, Mayor Fred Eisenberger is reaching out to emergency services and local organizations to work together to combat the epidemic.

Today, the mayor is hosting the Opioid Response Summit in downtown Hamilton to develop a collaborative response to a problem that is far bigger than any one organization.

“This summit is about mobilizing key institutions to better understand our collective challenges and opportunities to effectively prevent and respond to increased overdoses,” says Dr. Jessica Hopkins, City of Hamilton Associate Medical Officer of Health, who will be attending the conference.

“The key reason why these people are getting together is to decrease the number of people that are dying,” says Debbie Bang, Manager of St. Joseph’s Men’s Addiction Service in Hamilton, who will also be in attendance.

“These are our family members, our friends, our partners, our lovers, and it’s not okay for all of these deaths to be happening.” 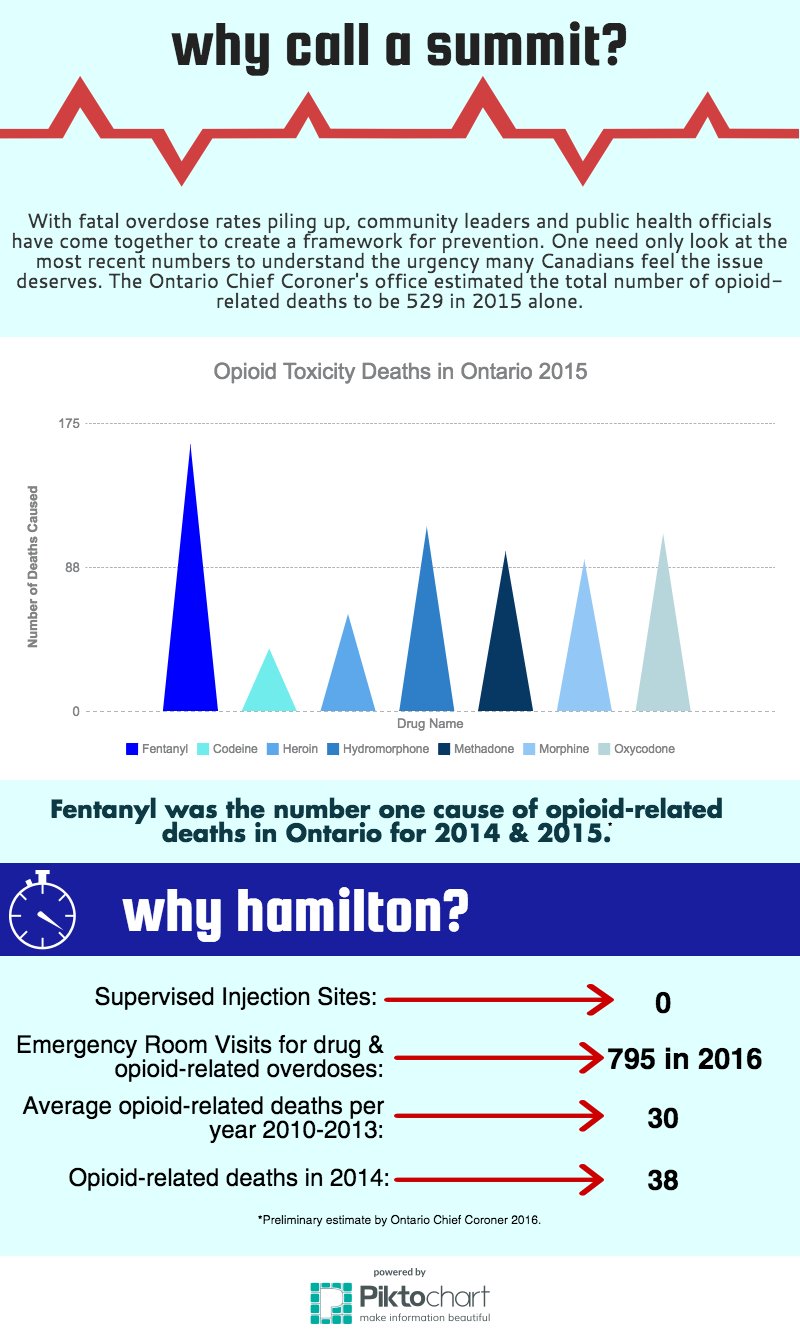 Hamilton has one of the highest rates of opioid-related deaths in the province and the situation is getting worse.

“It’s pretty bad. The opioid addiction keeps growing and growing with the increased fentanyl use,” says Kim Johnson, a staff member at Towards Recovery John Street clinic, a methadone clinic in Hamilton.

According to Bang, opioid addiction is not a new problem. The data she has based on admissions to St. Joseph’s addiction clinics show that there has been a steady increase of opioid use over the past sixteen years.

In the past, heroine and OxyContin were the drug of choice for opioid users. However, due to their high potency, fentanyl and carfentanil are being cut into drugs by dealers who want to get more bang for their buck.

Bang blames this lack of transparency for the increased rates and says that unsuspecting buyers are paying the ultimate price for this practice with their lives.

Hamilton Public Health has already responded to these overdoses by making naloxone kits available to the public.

Naloxone saves lives by reversing the effects of an opioid overdose through injection. Since 2014, 847 kits have been made available to the public in Hamilton, saving 268 lives.

These take-home kits are currently available at public health agencies and some emergency services, however, Dr. Hopkins believes that these kits should be made available through other local agencies like shelters to give easier access.

A Complex Problem, A Complex Solution

Even though the kits are effective in preventing deaths, Bang believes that they are only part of the solution. She says that there needs to be a greater focus on different strategies to tackle the dangers of opioid use, such as safe injection sites and monitoring opioid use to ensure that people are minimizing their dosage.

The city of Hamilton currently uses a four-pillar approach to dealing with substance abuse which includes prevention, harm reduction, treatment, and enforcement.

Eisenberger says that he “will be participating in an observation with the Van Needle Syringe program in the next couple of weeks to observe firsthand the situation in our community at street-level.” He hopes that the conference will enable a partnership between local stakeholders in order to deal with the problem.

Montreal hospital tells you if you’re next with a text