Toronto’s highways, rampant with crippling traffic bottlenecks, are causing over 7 million hours in delays annually, wasting over 22 million litres of fuel, and accounting for over $181-million in lost value of time, says a new report published Wednesday by the Canadian Automobile Association (CAA).

The report analyzed major highways across Canada and ranked the 20 worst bottlenecks across the country. Among the top 20, stretches of Toronto highways held 10 spots. A 15-kilometre section of the 401 from the 427 to Yonge Street topped out at number 1 on the list. 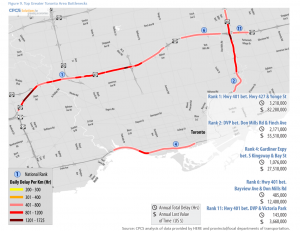 A 60-minute two-way trip in Toronto bloats to 96 minutes of travel time when considering these traffic bottlenecks – an impact that is the highest among Canadian cities.

The remaining spots were taken mostly by areas of Vancouver and Montreal. 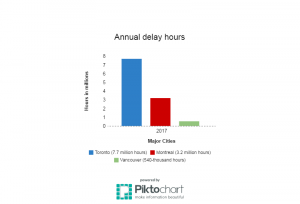 The full Canadian top-20 is as follows:

The full CAA report can be found here.

The bottleneck delays in Toronto are on par with the delays found in metro New York City, while the Montreal delays are akin to highways leading in and out of Boston – two cities with far greater populations than Toronto and Montreal.

The report highlights a troubling trend across the country’s major cities, especially in Toronto with a continuously growing population and aging infrastructure. The news begs the question, how do we fix this?

“It may be a matter of pouring concrete and asphalt in some cases, but there are a lot of other solutions as well,”  says Jack.

CAA and urban planners in cities like Toronto are looking outward for ideas and inspiration, analyzing what other major cities across the globe are doing to alleviate their own traffic woes.

The mayor’s office at the City of Toronto is aware of the extreme traffic problems plaguing the city, surely as are the millions that use Toronto’s highways daily. The City has made efforts to improve transit services with the aim of alleviating these traffic bottlenecks.

Most recently, Mayor John Tory unveiled plans to add toll routes to city highways designed to raise funds for future transit projects. The City of Toronto believes that the answers to the traffic bottlenecks are transportation alternatives like public transit, bike lanes, and carpooling lanes.

On the other hand, some experts are tempering the findings with caution.

Brent Toderian, the former chief city planner of Vancouver, warned that congestion is not entirely avoidable, especially on highways which he thinks should be viewed differently, as they are specifically designed for moving high amounts of congestion.

“Successful cities have congestion…” he said, “if you don’t have any of it, you die.”