The 2017 Juno awards are set to take place at the Shaw Centre in Ottawa this weekend.

Canada’s best will be in attendance and on stage, but after looking at the nominations list, one wonders: Where are the women? 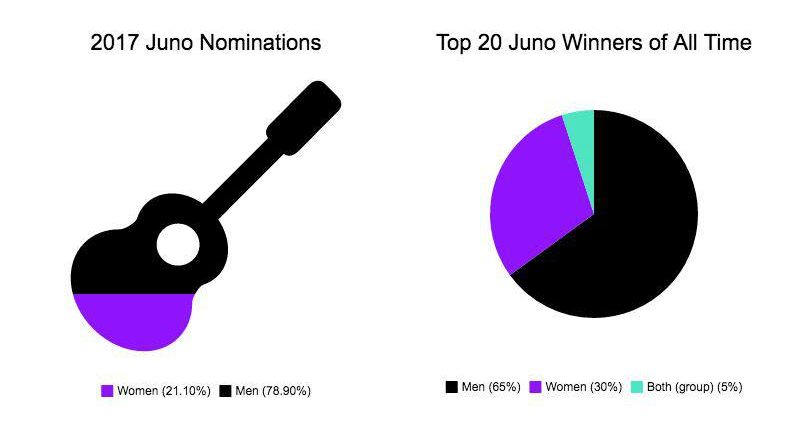 This year women make up a little over 21% of nominations. In the past, women have represented only 30% of total Juno wins.

Why is this? One might think that there are less female than male musicians in Canada.

Candace Shaw, founder of Canadian Women in Music says that simply isn’t true. She says while it’s certain that there are fewer women working on the production side of things, there’s just as many female musicians as male-identifying ones, and it’s possible that the self-nomination process of getting to the Junos and lack of encouragement may play a part:

“The music industry tends to believe across the board from bookers to agents that women are kind of the decorative flourish on the industry, rather than being the meat and potatoes. You’ll find that agencies don’t have a lot of women acts on their roster and festivals and events won’t have more than 15 or 20% women led acts on their stages. So when you look at those factors, women aren’t really encouraged in the industry in the same way that men are. There’s a lot of factors; all of them are at their base systemic.”

The full interview with Candace can be heard on Soundcloud below.

That’s a lot of food for thought. Here’s how some of the nominations break down for each category: 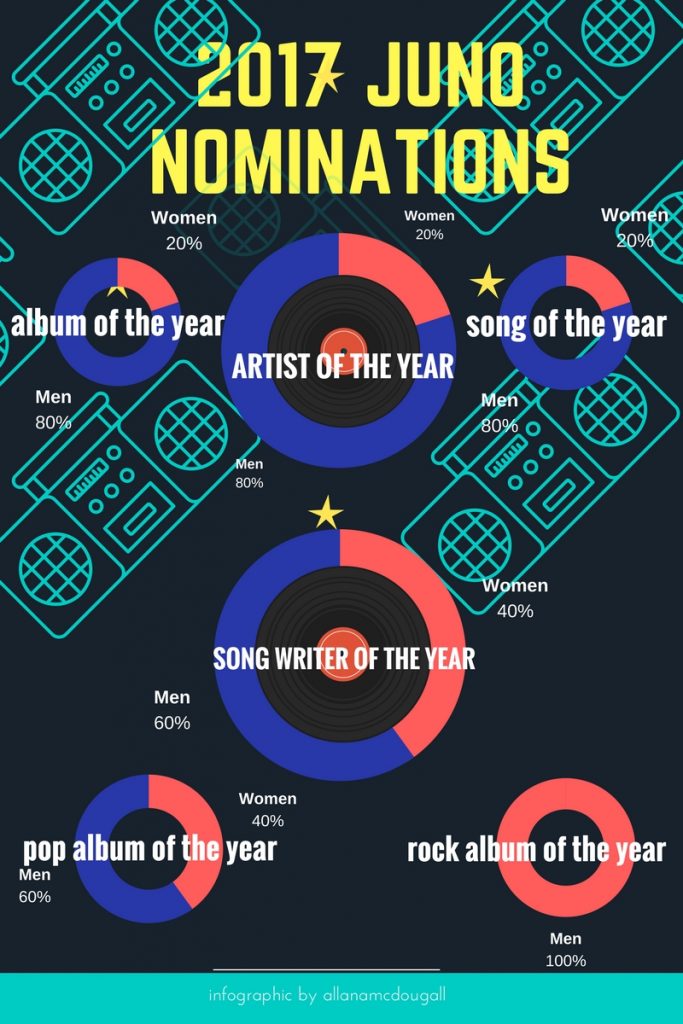 Men dominate every category; in eight, there is no female or non-binary gender representation at all.

There is no female representation in both the engineering and production categories.

Dan Broadbeck won a Juno for Recording Engineer of the Year in 2010 for his work on No Baggage, a solo album by Dolores O’Riordan (former front woman of The Cranberries). He is also Co-ordinator of the Music Industry Arts program at Fanshawe College, where he says female students are taking up the technical aspects of music production “more than ever.”

It’s a marginal percentage, still: at the beginning of the year, 120 students enrolled in first year classes in the program. Only 20 of these are women.

“We have an annual awards in MIA and our first female producer of the year (1st year) was last year and I don’t see that trend going down in our program any time soon,” Broadbeck said.

“We have more female students than we ever have but we may not see the effects of it for a few years because the majority of this graduating class will not be on festivals, or getting Juno nominations for a while,” Broadbeck begins, adding: “I engineered records for 23 years before I won a Juno Award because it takes a while to perfect the craft– you never do.”

Canadian rock sisters Tegan & Sara, nominated for three Junos including Songwriter of the Year of 2017, issued a statement in February. In it, they urge for greater efforts to be made by the Canadian Academy of Recording Arts and Sciences to increase inclusiveness in future years, while thanking the Academy for its acknowledgement. The tone of their statement suggests the next generation cannot wait.

“We bring this message to members of our industry who have tremendous power to sign, fund, promote, nominate, support, acknowledge, and celebrate the diverse population of our country working in the arts today. The demographic breakdown of Juno nominations reflects the structural confines of our society and industry. We must do better as it sends an outdated message to the next generation about whose art and voice and message is valuable.”

(You can read their full statement, here)

The call was echoed by Alysha Brilla and Amy Millan (of Stars and Broken Social Scene) on social media. In 2016, Millan started a hashtag- #junossomale that gained traction and attention. The hashtag continues to trend this year.

When asked about the impact underrepresentation makes on Canada as a whole, Shaw had this to say:

“I think the quality of the event suffers. Whenever you have a monoculture, you lose a lot of finesse, you lose a lot of skill, you lose a lot of quality and detail. I mean, for myself if I go to an event and it’s just the same sound four or five hours straight, I get really bored. You start to tune out: your ears need a change and so do your eyes… When you end up with a fair monoculture at an event like this, that is supposed to represent us nationally, for all that they are I think they are trying, it (the Junos) still represents a very narrow slice of the industry.”

Why do you think female under representation happens at the Junos?

Take our poll and feel free to include your own reason under the “Other” category in your response!

A Sampling of Canadian Female Musicians from 741055074 on 8tracks Radio.

Sneak peek for next week at the 2014 JUNO awards