February is Black History Month and there are a number of events for you to attend! Oakville has a rich black history to be explored. Here’s how you can participate, and engage this month:

Museum is open Tuesday to Saturday, 1pm-4:30pm and closed on Mondays

Freedom, Opportunity, and Family: Oakville’s Black History is a stunning exhibit that can be viewed at The Oakville Museum year-round. The exhibit features the stories of early black families that settled in and have contributed much to the community of Oakville.

Of particular interest is a pocket watch that has been donated by Joe Johnson, great-grandson of freeborn Branson Johnson in 2008. Mr. Johnson was cleaning the pocket watch in the 1970’s when suddenly, something amazing fell out of it: his great-great grandfather’s freedom papers. The watch, and the freedom paper have been graciously donated for display.

Also part of the exhibit, is a 30 minute interactive presentation called The Underground Railroad: Next Stop, Freedom. The presentation follows the heroic true story of Deborah Brown, who fled slavery in Maryland and settled in 19th Century Toronto.

Passing it On: Oral Traditions and Stories at SENACA Senior’s Day Program

Seniors are invited to share their own stories and partake in an interactive performance of Caribbean stories and artistic roots.

Journey to Africa, an African Canadian Art Exhibit is on display at Oakville Town Hall for most of the month of February. The exhibit features items that explore the convergence of contemporary and traditional African art forms.

Bring your family to the Queen Elizabeth Community and Cultural Centre to hear the beautiful sounds of steelpan music and take in the wonder of Caribbean Dance. Sure to be a great way to spend an afternoon on a day off with loved ones! 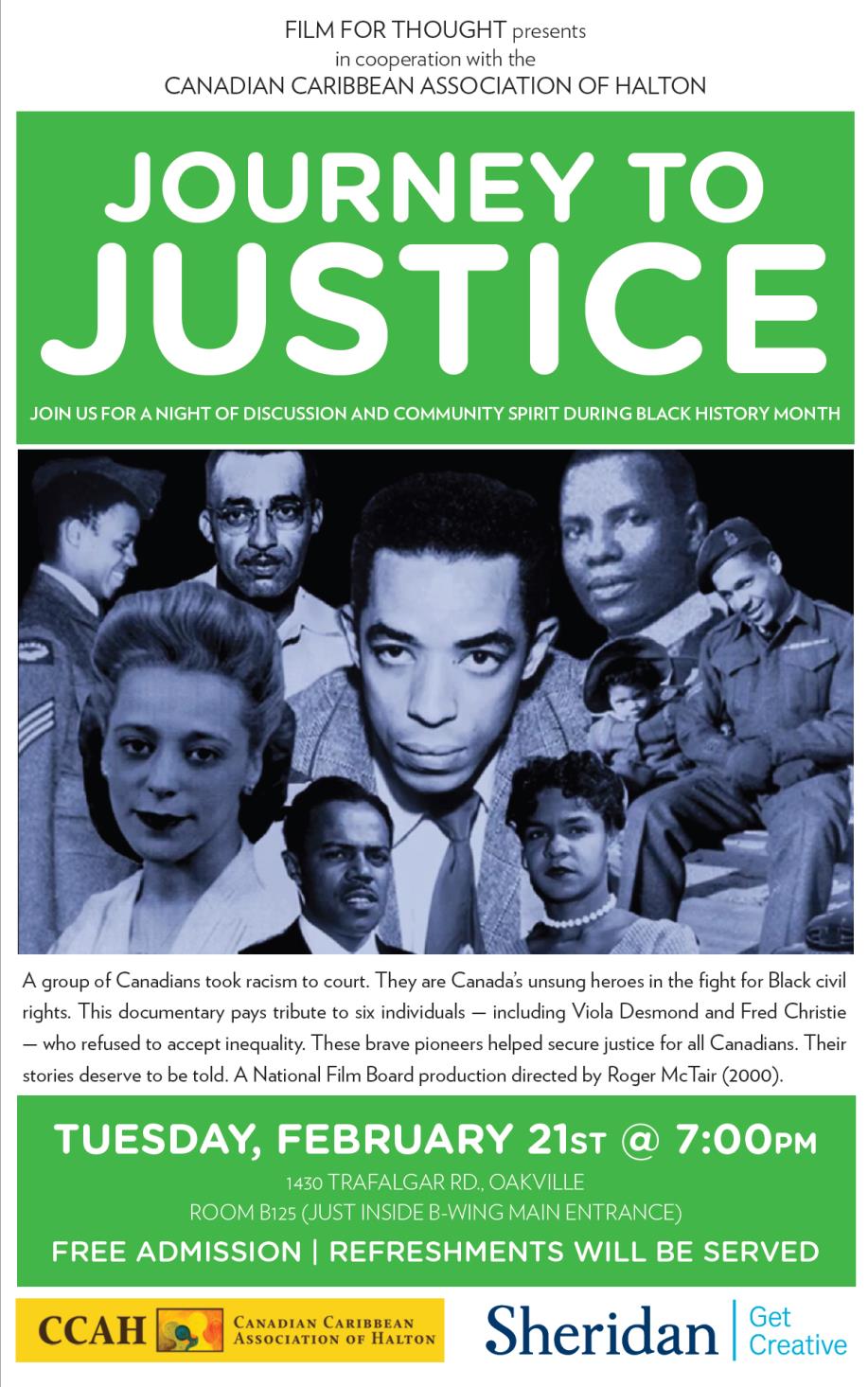 Veronica Tyrrell, 2017 Board Member and President of the Canadian Caribbean Association of Halton is eager to see Sheridan students come out to this event:

“Many may not be aware of the fact that we did have these injustices and slavery here in Canada. Many think it was just in the United States, that that’s where the whole fight was. This film will be very educational; it will be a good start.”

The film follows the journey of 6 people as they fight racial injustices in Canada. On November 8, 1946 Viola Desmond was charged, and received a criminal record after being dragged out of the Roseland Theatre in New Glasglow, Nova Scotia for sitting in an area designated for “whites-only”. Her charge was fought through the courts and Viola’s case became one of the most highly publicized racial discrimination cases in Canada. Rather take into account segregation, the courts said she didn’t pay the right fee, which was a one cent difference in the section she was sitting in. It was only in 2010, 45 years after Viola Desmond’s death, that the courts pardoned her of that criminal record. In 2016, Desmond was chosen as the first woman whose image will grace a bank note in Canada.

This film, by Roger McTair for the National Film Board will be a good starting point for students to learn about Black History in Canada and a number of students should come out to see the Journey to Justice on the 21st.

Listen to Veronica Tyrell speak about the importance of Black History Month and how we can engage, here:

Head over to the Marquee after the film screening for the Sheridan Student Union’s February Open Mic and Poetry Slam under the theme ‘Love in All Colours’. Poetry and voice in honour of Black History Month will be celebrated and participants may compete for a $100 prize in both categories. Poster entries from the Black History Month Love in All Colours contest will be on display.

Vocalist/pianist John Campbell and his Band are sure to blow the roof off of the Queen Elizabeth Park Community and Cultural Centre on February 25 for a Black History Month Soul/Gospel Cabaret Concert and Dinner.

The Honouring: More to Canada’s history than 150 years