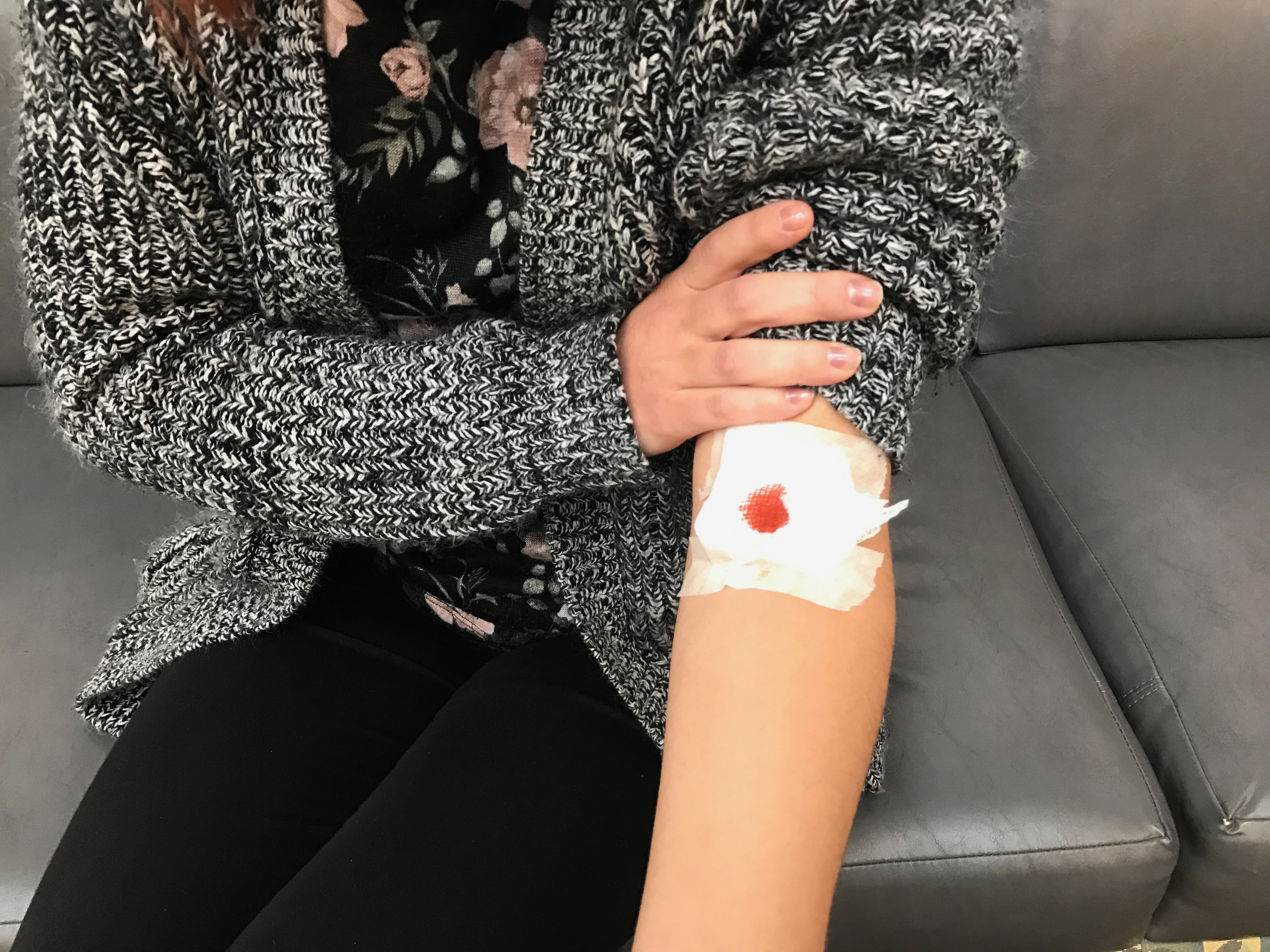 If it were not for the weekly blood transfusions that Kevin McAdams received during his battle with Aplastic Anemia, a condition caused by the Hepatitis-C virus, then the Oakville father of four would not be here today.

“It’s not a stretch that it saved my life,” said McAdams.

New regulations introduced by the Canadian Blood Services that limit how often women can donate is making it difficult for the organization to meet the needs of people like McAdams.

The regulation has been put in place based on iron guidelines that limit the amount of times women can donate blood per year.

Female donors must now go from waiting 8 weeks to 12 weeks after giving blood before they can donate again. This was implemented last December by the CBS because of the lower levels of hemoglobin and iron in women.

Even though these regulations are necessary to ensure the health of donors, they do make it harder for the CBS to assist patients who require transfusions.

“The new regulation has a big effect. Because of it, we anticipate a loss of approximately 35,000 donors this year as a result of these changes and more donors are needed to fill the gap,” says Lilet Raffinan, CBS Territory Manager for the GTA.

This change will make it even harder for the CBS to meet their goal of getting 100,000 donations by the end of the fiscal year in March. As of right now, they have had 65,000 donors.

Despite the ability of blood donations to help save lives, the amount of donors has been declining for years, according to John Fawcett-Hospital Liaison Specialist for CBS.

Even though almost half of all Canadians are eligible to donate blood, less than one percent of these people donated last year. 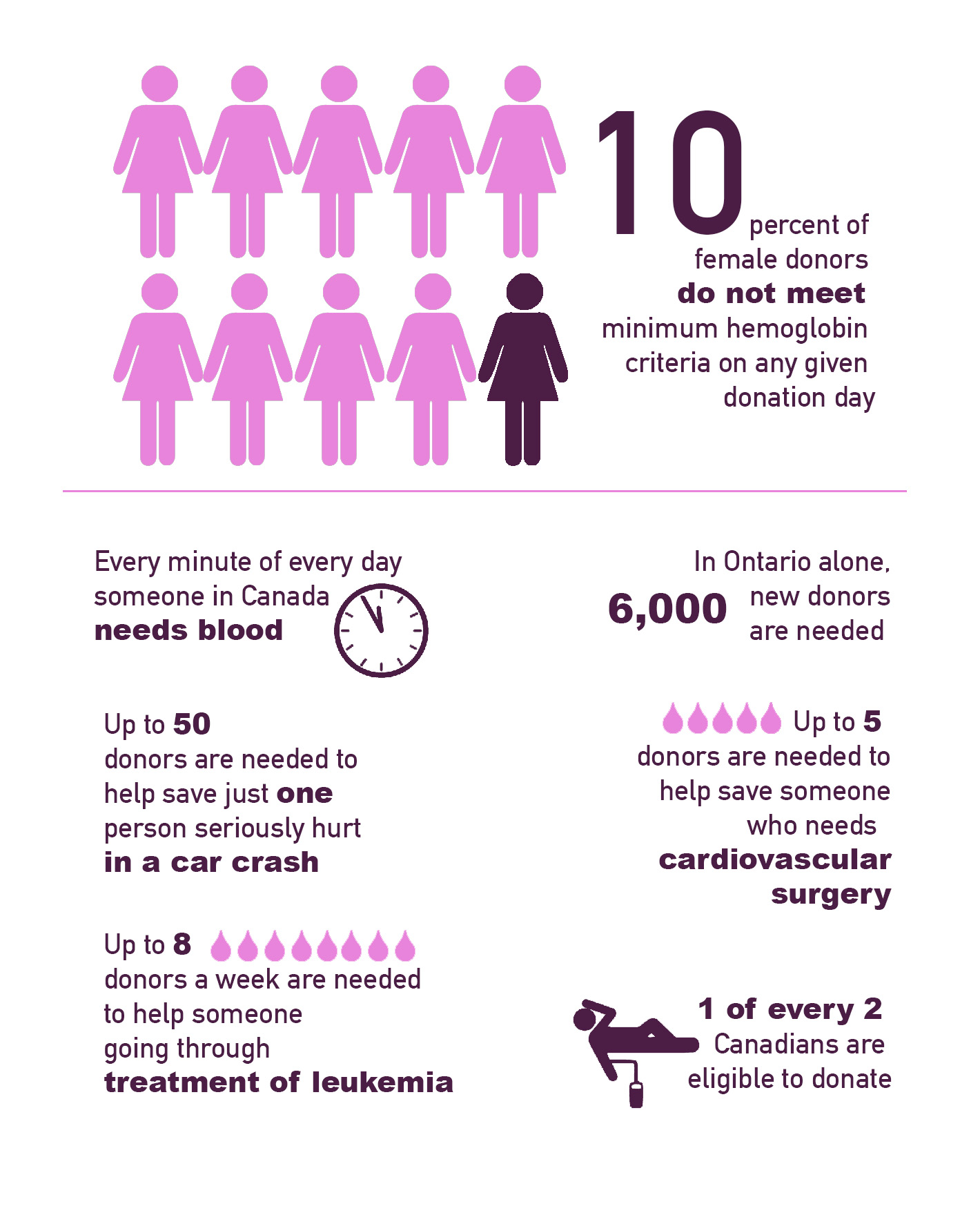 Kyle Donald, who was involved in a motorcycle accident last year and depended on blood transfusion to survive, says that this number reflects a failure by the CBS to create awareness of who can donate and how.

Donald, who must now take medicinal marijuana to deal with the pain from his injuries, says that before his accident he had no idea that people taking medications are able to donate.

“I don’t think they educate people on who can donate and who can’t. If it was more advertised or easier to access, then I think more people would do it.”

Raffinan says that up until now, the CBS has advertised using more traditional methods of campaigning such as radio and television.

However, these methods often do not reach or appeal to millennials, who feel like the campaigns are not doing enough to connect with them.

“It’s not really out there advertised. Obviously, there is a commercial here or there, but it’s not really everywhere like the Kardashians are, so it’s not really implanted in your head,” says 19-year old Julia Brugnon who has never donated blood.

“Everyone is on Instagram and twitter or something. If it were more on social media and stuff, I would be more motivated to do it,” says Brugnon.

With an aging baby boomer population, it is vital that the CBS are able to recruit millennials to meet the demand.

In order to attract younger people, the CBS have introduced a guerilla-style campaign, in which employees and volunteers make their presence known in public spaces and approach people to inform them about how to give blood.

Raffinan says that they CBS is also strengthening their relationships with college, high schools, and universities to create more awareness on campuses.

Technology will also figure prominently in recruitment efforts for donors. A bigger emphasis on social media will also  be used to reach millennials in a more accessible way.

These efforts will build on technologies such as the GiveBlood, an app introduced by the CBS in 2014 which already has 200,000 downloads. It informs users of their eligibility, where the nearest clinic is, and how they can donate. It also sets reminders for donation appointments.

The CBS predicts that they will need 100,000 donors in the fiscal year of 2017 to fulfil needs of patients. Raffinan says that she hopes that the new awareness campaign measures will appeal to a younger demographic.

“We need the help of new donors and the regular donors to ensure that patients receive blood when they need it most.”