Canada Goose is trading today on the TSX for the first time.

Shares in the Canadian company, known for its $900 parkas, are currently trading at $15.00 a piece. The company had projected the shares would trade from $14-$16 a piece.

The outerwear manufacturer is trading under the symbol GOOS in Toronto and New York.

Animal Rights group PETA announced on Tuesday it would be buying shares in the company. PETA and other activists protest the coat manufacturer for its use of coyote fur and goose feathers.

PETA plans to buy “the minimum amount [of shares] required,” to speak at the company’s annual meetings and to submit shareholder resolutions to ask the company to stop using animal products in the jackets.

The Oakville Sun has contacted PETA to confirm if it has purchased the shares, but at time of publication had yet to hear back.

Canada Goose was founded in Toronto 60 years ago by Sam Tick. It was originally known as Metro Sportswear Ltd. and specialized in woollen vests, raincoats and snowmobile suits, according to the company’s website.

History of The Canada Goose Parka 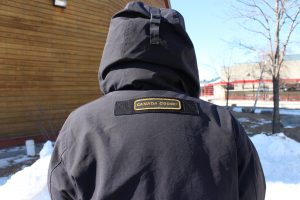 The famous down parkas originated in the 1980s. They were originally manufactured for scientists in the Arctic.

In recent years, the down coats have hit the streets of major cities.

They have been made internationally famous sported by Kate Upton on the cover of Sports Illustrated and worn by James Bond, played by Daniel Craig, in the the 2015 film Spectre.

About India Mcalister 8 Articles
India McAlister is a badass feminist writer, who has previously written for various publications at the University of Toronto. She has experience in public relations, speech writing and SEO strategies. India has covered topics ranging from NXNE festival coverage, gender politics and medical innovation. She is interested in broadening her scope, and is currently pursuing her postgrad in New Media at Sheridan College
Website Twitter LinkedIn