Canada is now home to over 35 million people and still growing steadily with a national average growth rate of 5%, according to the 2016 mandatory long-form census.

Alberta leads the charge among Canadian provinces with more than double the national growth rate, while New Brunswick finishes in last place with a negative one percent growth rate. 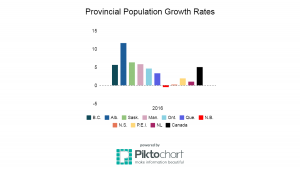 However, some interesting trends have come up in the census data.

Ontario is below the national average, with a growth rate of about 4.5%, for the second time in a row. The last time this happened was the Second World War.

Nationwide, the top five cities for population growth were all out west, with Calgary taking the top spot. 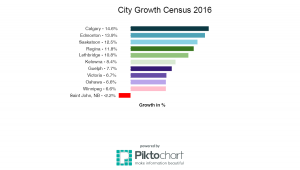 The new 2016 census data shows that Canada’s three biggest cities – Toronto, Montreal, and Vancouver – account for over one third of Canada’s entire population. In addition, all three of those cities have experienced growth above the national average.

The intriguing trend is that while the big cities continue to grow bigger and bigger, it is the smaller cities that are continuing to shrink.

Despite Ontario’s capital sitting at a 6% growth rate, and other large cities like Ottawa and Mississauga continuing to grow above the national average, it was smaller towns throughout northern Ontario that dragged down the provincial average to a point below the national average. 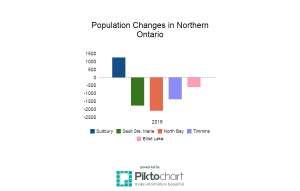 This is a concerning trend that could spell economic trouble for smaller Ontario towns already in precarious financial situations. The continued growth of Ontario’s – and Canada’s – biggest cities could add additional strain to roadways, transit and public services.