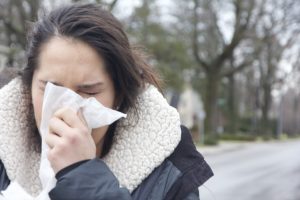 A recent study from the University of Gothenburg has given credit to the old wives’ tale stating that swings in the weather will make you ill. The study found that sudden drops in outdoor temperature increase the risk of respiratory infections – including common viruses such as the flu. With the temperature expected to cycle between temperatures above and below zero starting from Friday and following this pattern for the next two weeks, citizens of Toronto and its surrounding areas would be wise to take precautions with regards to the flu.

“We believe that this sudden drop in temperature contributes to “kickstart” the epidemic. Once the epidemic has started, it continues even if temperatures rise. Once people are sick and contagious, many more may become infected,” said the study’s principal investigator, Nicklas Sundell.

A ‘kickstart’ effect is when cold, dry air allows “aerosol particles” containing liquid, viruses (and other microbes such as bacteria) to remain airborne, ready and waiting for a warm body to invade.

These are only contributing factors to an epidemic – for starters, the virus needs to already be present in the population, and there have to be enough people vulnerable to contracting the infection. So, in areas with a large population such as Toronto where all the aforementioned criteria are met, it is extremely likely that there will be a flu epidemic each time there is a cold snap. Thus, hospitals CAN plan a pretty picnic (with regards to the flu) IF they can predict the weather- “If you can predict the start of the annual epidemics of the flu and other respiratory viruses, you can use this knowledge to promote campaigns for the flu vaccine and prepare emergency wards and hospital staff in advance for an increased number of patients seeking care,” said Sundell.

Although this information good to keep in mind for future flu seasons, this year’s flu season is already underway. Furthermore, it may take some time for the findings of this study to be accepted in the medical community.

“There’s been a bit of a change in thinking about whether it’s the cold itself that increases your chances [of becoming sick] or just the activities around winter such as staying in more, taking transit and coming into contact with everyone’s germs.” Said RN Emily Smith.  These new findings also do not necessarily provide average citizens with any new ground-breaking solutions for avoiding the flu. “Regardless of the cause, prevention is still the same.” She said. “Get your shot, wash your hands, cough/sneeze into your elbow, exercise, eat well, stay hydrated, and stay home if you’re sick.”

This advice, though well-known and often repeated is not to be taken lightly – late 2016/early 2017 has seen a record number of influenza cases. Even though reports say that the flu shot is not as effective as in previous years, you can at least reduce your risk to some degree. For those who are really concerned about the impact of the weather on their health, the Weather Network website offers a daily report called the “Active Weather Triggers” which takes into account factors such as temperature and humidity to predict the risk of contracting the flu regionally.