Climate change has become a big deal since natural catastrophes made the discourse on increasing temperatures different. The first Quebec climate change report in 1995 raised a discussion on how warming affected golfing in the province. Now things changed dramatically. The question is no longer about golfing, but about transportation.

When Steven Guilbeault got to Montreal over 20 years ago there was no bike culture. He has been biking 12 months a year since 1999.

When he started people would try to push him meaning, “What are you doing on our roads?” 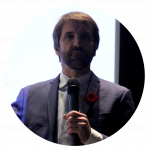 In a matter of two decades Montreal became much more bike-friendly.

“There are hundreds of kilometers bypass and hundreds of people cycling,”
says Steven, who went from the environmental activist to cofounder and senior director of non-governmental organization Equiterre, that works on improving the environment.

According to the information provided by national polls, public by and large supports the government in its attempts to affect the climate change.

77% of people say they want to see the national plan for government to achieve the targets they set in Paris. 81% people want more renewable energy. Looks like strong majority wants to see the action.

But it’s not only about government. Environmental activists complain, there’s much misunderstanding of what improvement of environment actually means. 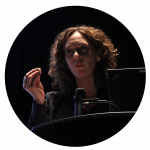 “People might be starting to be engaged and worried about oil spills or water. And it’s not a climate issue,” says strategic advisor on climate and energy issues Tzeporah Berman. “It’s an issue that starts the conversation at home.”

As people learn more about the issue, they see the influence of oil industry, they talk about what’s the alternative to pipelines.

Some of the people that Tzeporah started organizing in British Columbia five years ago on the pipeline issue were there because they were worried about the water or the land. And as they were digging deeper, they became climate activists.“It’s not just a policy conversation,” says Tzeporah, “it’s knocking on doors, it’s doing the organizing that we need to do to engage the civil society into the issue of climate change.”

What Tzeporah is worried about is the changes that happened when Christy Clark came to power in British Columbia.

“The environmental movement in BC was confused and scared, because it was for most people traditionally a movement of the left. Most of the environmental groups just shut up because they were afraid of being seen to be supporting liberal policies. And climate policy became partisan football.”

“Transportation is a big challenge in Quebec,” says Steven.

“It’s 44% of our emissions. What we planning to do is funding for transit. We have yet to make our decision makers understand the importance of planning. It is already changing in local level. But there are still issues at provincial level.”

In September government of British Columbia announced its new climate leadership plan. This government’s economic strategy is based on increasing gas and energy development. The strategy is more about greening, but not about getting of fossil fuels in the climate era.

Tzeporah also sees the fault in our own as environmental community.

“The debate becomes so much on the policy mechanism and on the tax that we lose sight of a critical issue. Are we building the world we want to live in or are we getting rid of the bad stuff and our emissions are going down? Are we creating clean economy? Those should be our markers for the future.” 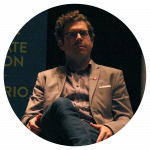 Keith Brooks, Director of the Clean Economy Program at Environmental Defence, has very positive views on who is winning the climate fight.

“We are making a lot of progress. We’ve got provinces that had taken great action, lots of reasons to celebrate technologically – there are amazing things happening with renewable energy. But even though we are winning it, we are not winning fast enough.”

It really matters how fast governments are taking actions. However, there is a good point of it already – they are doing something to improve the world we live in. And as long as you keep riding, you don’t fall.

Cars can save the planet too

The very moment you get into your car and start your engine you let greenhouse gas emissions cause climate change. But there is good news for car lovers.

There is still that perception that we can tackle climate change with still doing a little bit of oil and a little bit of gas. Steven insists we can’t do both. We need to get rid of fossil fuels faster than we are doing now.

If you want to go and buy electric vehicle, most sales people will try to discourage you. They will tell you that it doesn’t really work, and they are not being produced for long, and the batteries don’t work during winter. They’ll find all the possible excuses to keep you from doing it. But they should not.

“Five years ago Quebec had zero public charging stations for electric vehicles. Three years ago we had about 15. Today we have a thousand – twice as many as you do in Ontario. You guys will catch up soon enough,” says Steven.

There is a city in Canada that sells 20% of all the Chevrolet Volts. The place is called Rawdon and it’s an hour and a half north of Montreal. For some reason two brothers have chosen this city which is far away from all the highways and that even the Quebec citizen has to google.

They will help you to fill the form to purchase an electric car and make sure you have a charging station. If not, they will send a person to come and install that for you. They make it as easy as possible. That is their business model. It’s not about technology, it’s about making a decision and changing the way we look at things.

“We have lots to be hopeful,” says Steven. “There are some challenges, but we are hopeful.”