Oakville’s Reid McEachran has been named to the Canadian team for the FIS Freestyle Ski Championships held in Kreischberg, Austria.

This is the 21-year-old’s first time on the national team.  Last season, McEachran placed within the top 15 in  five slope events, winning 6th place at Aspen/Snowmass Freeskiing Open and 12th at the Association of Freeskiing Professionals World Championships in April 2014.

McEachran started skiing before the age of two, starting out as a racer.  As a preteen he got inspired to pursue free style skiing after attending water ramp training with his brother in Quebec City.

Along with being a world class skier, Reid is working toward a Bachelor in Commerce at McMaster University and works as a bartender at a local Oakville restaurant.

Conflicting dates with this year’s Winter X games, have left many spaces on the national team as regular national team members, like Reid’s older brother Evan McEachran, have chosen to compete in the Aspen event. This overlap has allowed Reid and other members of Canada’s development team to practice competing at the global level.

Louise McEachran, mother of Reid and Evan, is thrilled for both of her boys.

“It’s always been about loving the sport and having fun,” she said.

“Evan and Reid have always been a team, traveling all over the world together,” McEachran said.

Reid left for Austria last night, “stoked” to be competing and wishing his brother well for the X games.

Although, she and her husband will be in Aspen for the X games, they will be cheering on Reid virtually by watching the competition online.

The FIS  Freestyle Ski Championships will be held on Jan. 20 to 21. CBC coverage of the men’s slopestyle competition will air at 8 am on Jan 21. 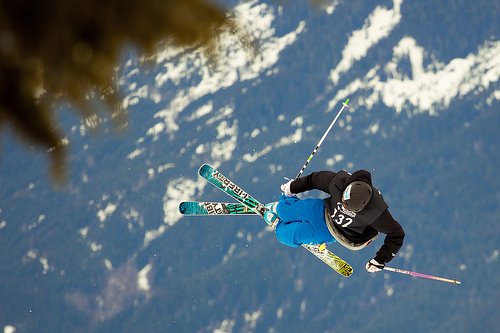